The municipality of Gambassi Terme, within the province of Florence, counts around 5000 inhabitants and is located in the heart of Tuscany, best known for its unique landscapes of soft green hills, lines of cypress trees and dirt roads.

Gambassi Terme, best known for the thermal spring waters of Pillo, is positioned along the Volterrana road (once called via del Sale – Salt Road) which already was an important communication route between Florence and Volterra during the Etruscan civilization; many in fact are the Etruscan rock constructions and archaeological findings in this area, in addition also to evidence of the late Roman period ( such as the  roman Cystern that is located nearby, in the area of Poggio all’Aglione). 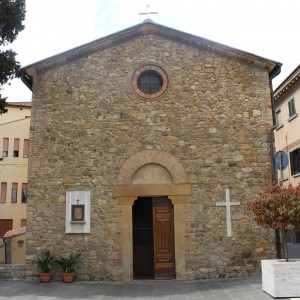 Later, during the medieval period, the urban area of Gambassi developed thanks to the Cadolingi family (a powerful family originally from Lombardy), and later thanks to the bishops of Volterra and San Gimignano, until it became territory of Florence.

Also during the medieval era, the art of the “Bicchierai” – glass-blowers developed: this art became very important for the urban growth of the town, with true masters of the art of glass-making, who manufactured glass-made objects, particularly for conservation and commerce of local produce such as olive oil and wine. The fame of the glass-blowers from Gambassi Terme was such throughout Italy, they were called to Murano to teach the art of making glass.

Today the territory around Gambassi Terme is strictly tied to farming, with the production of premium olive oil and wines; the Villa Pilo farm has invested on enhancing its synergy with its “terroir”, adding French vines, that well adapt to the quality of the soil, aside the their classic cultivation of Sangiovese. The area has also become a destination for many attracted by the agritourism and by the famous via Francigena – an ancient pilgrim route.

Before reaching Gambassi Terme, on the Volterrana road, at the end of stage n. 8 of the via Franchigena, we find the Pieve di Santa Maria a Chianni, a religious building dating back to the year 1000, in full Romanesque style. Its strategic position, at the intersection between two important routes for pilgrims and communication, made this parish church particularly important as a temporary stop in their travels; one of many pilgrims that rested here was the Archibishop of Caterbury Sigeric, in the early 11th century.

The church features an ashlar sandstone façade, divided in three vertical blocks that introduce the internal naves; the central nave features three arched doors with the central main door and two orders of loggias above.

Inside the two lateral naves and the central one, with relative apsis at the end, are roofed with hardwood and terracotta tiles.

The spare features of both the inside and outside of this church are typical of the Romaneque architecture and give a more magical and fascinating appearance to this site which is well worth a visit, as many of the pilgrims have done in centuries, traveling along the Salt Road (via Volterrana) and the more famous via Francigena.

The Importance of Rome is typified by the vast network of routes and roads that from all of Europe were travelled to reach the “Eternal City”; one of the most important was the via Francigena, a network of roads that originated in, and other areas of Europe, reaching the south of Italy. 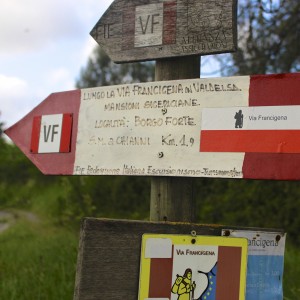 The segment that directly interests Villa Pillo, and that crosses the estate itself, is the one running from San Miniato to Gambassi Terme (about 24 km); The Region of Tuscany has recently upgraded all of the routes inside its territory, for a total of 380 kilometres, which has brought even more visitors to the sites.

Stage n. 8 crosses Villa Pillo, from Rio Pietroso at the north end (starting at Strada Provinciale n. 26 delle Colline), arriving at Via Volterranna to the south, in correspondence with the Pieve a Chianni; this pathway crosses many vineyards and hills belonging to the estate and also  “Borgo della Meliana”, that allows the pilgrims for a rest before reaching the next stage.

Visiting this site for the first time provokes so many emotions and feeds the awareness that Tuscany is a territory full of hidden treasures and unique and unforgettable landscapes.

Visiting this particular site of  “Sacro Monte di San Vivaldo” brings a true sense of awe and pride to the people born in this region.

Positioned at 450 metres above sea level, between the hills of Montaione (15 minutes from Villa Pillo), and dating back to the 1300s, the complex of San Vivaldo, besides the convent and the Church of the Francescan Order, also includes 17 chapels that were built to reproduce the holy sites of the far away Jerusalem (it is hence named “The Jerusalem of Tuscany”).

Each chapel represents a different episode of the life and passion of Jesus Christ; and beautiful terracotta artwork  form the Della Robbia school are an added evidence of the beauty and preciousness one can admire inside the chapels.

The pathway that leads from inside the country woods, running along the seventeen chapels and finally reaching the convent.

A route and a place, like many in Tuscany, that we recommend to all visitors.

Immediately after the Fattoria di Pillo, along the via Volterrana there is a dirt road with directions to Sorgente Termale di Pillo – Thermal Baths of Pillo: after a few miles we find the “Borro dell’acqua Salsa” , literally stream of salty waters, also known as “Acqua Salsa di Pillo”.

A pumping system, inside a purpose built construction, draws water and brings it to the thermal baths of Gambassi Terme.

The thermal water of Pillo have many recognised beneficial and healing properties: it is rich in minerals and is hypertonic, perfect for both digestive and respiratory systems; its name “Salsa” means in fact salty: here the connection between the via Franchigena and via Volterrana that were always known in the past as the “salt roads”.

You can find out more about which cookies we are using or switch them off in settings.

This website uses cookies so that we can provide you with the best user experience possible. Cookie information is stored in your browser and performs functions such as recognising you when you return to our website and helping our team to understand which sections of the website you find most interesting and useful.

Strictly Necessary Cookie should be enabled at all times so that we can save your preferences for cookie settings.

If you disable this cookie, we will not be able to save your preferences. This means that every time you visit this website you will need to enable or disable cookies again.